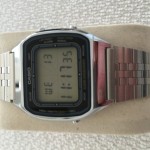 This is the exact model that was worn by Captain Murphy, played by the late Roy Schneider, in the movie Blue Thunder from 1983.

There are a couple of other Casio models that looks very much like the AA-85, like A201 and AA-81, but they are not any near as collectible and valuable as the AA-85.

The watch was released in 1980 and has a very interesting count down function which in the movie was used to check the sanity of Captain Murphy. 🙂